In the Thai Cafe: A Taos Story

It was straight across from the only McDonalds in town. I don’t know. Maybe that’s why… 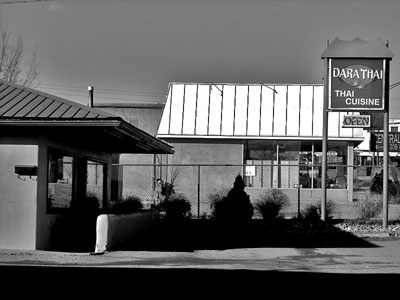 Painted like a lego building, bright brick reds and everything. Even a faux pseudo Asian roof thing over the counter, also brick red. Really, lego-like.

I’m the only customer in the whole place.

The waitress, Hispanic, big boned, had a sad look on her face, or like she was very very tired about something. This man–the owner? her boyfriend? her pimp?–was leaning hard on that counter, talking to her. I thought he was going to lean there the whole time, never turn to face me.

Except that halfway through–right as the waitress was bringing the pad thai–he left. And the way he said gracias. It was a way that didn’t make him sound like the owner or the boyfriend or the pimp.

I guess there were Asians there, too. Well, there was this one–who knows if she was Thai–maybe she was the cook. She was in the back, in the kitchen. It was a big kitchen, and there were lots of noises coming from back there.

Halfway through my lunch, the Asian lady comes out from the kitchen and sits in a booth where I can’t see her. She starts fiddling with something – I hear a lot of static, that I remember – a radio or maybe a small television, and then she tunes it up to what could be some Asian pop station or something.

I’ll tell you one thing I didn’t like. I didn’t like the way the Hispanic waitress stayed behind the counter the whole time, not watching me really, but able to watch me. That’s my point.

I didn’t see any chopsticks in the place, anywhere.

I’m pretty sure the Asian lady wasn’t the only one in the kitchen, because when she was out listening to her radio station or something, I heard the noises.

The Hispanic lady then took to standing at the counter behind this fake potted plant. She really took to it, too. Which I don’t know if she thought it disguised the fact that she could be looking at me or not. But it was annoying, I’m telling you.

Absolute worst pad thai I ever had. Surely you can get that. My lips felt like they were burning right off my face. And it wasn’t even that spicy, that’s the thing. But I kept eating.

I bet she–the waitress, I mean–didn’t even care that the whole town was full of artists and things.

Sort of when I was finishing up the noodle stuff, I noticed the waitress had been, you know, rotating this paper between her fingers. I had to be the check. I’m sure she wasn’t trying to let me see her doing it, but that wasn’t the point. It was clear to me.

I’m not complaining. At least it was cheap.