In the Public Library: A Taos Story 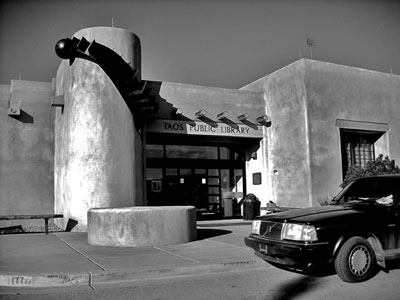 That was the first bum talking. The other bum had been talking real loud for a while already.

“Fine,” the other bum said, real loud. And they left.

The guy sitting next to me was still wearing his cowboy hat–inside. He’d slung his jean jacket over the chair and was reading a Rolling Stone. It was in one of those plastic things they put magazines in at public libraries. The thing that really got me was, here was this cowboy type, boots and beard and ect–everyone had beards here–and his Rolling Stone cover is some shirtless hearthrob rocker. That really got me.

Also, the guy smelled like baked beans. I didn’t move, though. There were other seats, but…

Old, digested baked beans, I’m telling you. It made you feel like moving your bowels.

This old lady came up next to me. Real old, but moved like she was even older. A real crotchety one, the type you know is going to find anything to get mad about. Even she had a beard. She tried to pull out a seat at the table but she kind of couldn’t. I think it was wedged against another. I thought about helping her.

She leaned back and sort of collapsed into the sofa behind her, grumbling already. That had been her plan the whole time, not the chair, was what I told myself.

This other lady, a blonde, she was sitting with her boyfriend or lover, over this art book. She was one of those women in her forties trying to still look like she was twenty. She was talking loud, too.

“The ancient peoples,” she says. If she lived in Orange County, she would’ve had botox and three procedures already and been wearing pink sweatpants. But we were here so she was just old and blonde and wrinkly and wearing too much makeup.

“The human body produces a distinct aroma,” she says. She was making some point about ‘the human art’, but I didn’t understand it. It made me think of the guy next to me, though, the baked beans. Not much art there.

The old lady leaned forward and tried to put one of those plastic-sleeve magazines on the table but miscalculated and it fell off and onto the floor. She started grumbling. Both of us left it where it was.

I’d been going there a few days by then. It was always like this. These are the kind of people who in the middle of the day…I was thinking, but then it occurred to me that I was there too.

By this point I really did need to move my bowels. Public libraries do that to me, plus I was drinking too much coffee. But I’d already been inside the restroom and seen the stalls, so.