Look. I don’t know why I kept going to Asian places. 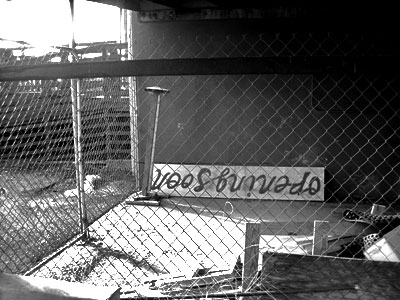 Only place in the whole town, practically, that didn’t have the baby blue doors. I think it was a city ordinance. Or whatever you call it when it’s just a town. Maybe that’s why…

The sign read “Songs Fine Asian” in red stencil. The thing was no bigger than my sixth grade science-fair poster. Down below, they’d painted “Cuisine”. It had Asian characters, too, but I didn’t know them.

First this sushi chef greeted me, like at real restaurants. And this time I wasn’t the only customer. This bearded guy at a booth, eating with one hand in his lap the whole time, he had a jacket on and this smile. There before I got there and after I left. One of those. And there was a couple.

Quiet, soft Asian music playing in the background, you know, all pentatonic, but westernized.

The miso didn’t look like any miso I’ve ever seen. But I still drank it. I drank it holding the bowl to my lips, for the benefit of my waiter.

But I didn’t drink all of it, you know, for the benefit of my waiter. The wasabi looked off, too. Not that I’d know. My point is, once again, no chopsticks on the table.

“Where’s your washroom?” said the couple woman. She had tall boots and tight jeans.

“‘s over dere,” said my waiter. He was wearing tight jeans, too. But it was the ‘washroom’ thing. That’s why I mention it.

“‘s comin,” said my waiter when he took away my soup.

“Thanks,” I said. I wish I weren’t so ingratiating.

I think it was a family business thing, because there was this guy who looked just like my waiter, except older, with a limp and an orange jacket.

Everyone wears jackets here, all the time, I’m telling you. I mean, after that, six of them came out of the kitchen, to eat lunch. I guess I’m eating lunch late lately. But all of them, jackets. Except my waiter.

One of them said something in Asian and pointed at this famous photograph on the wall. You know, the famous one with all the people sitting on the I-beam in the sky, eating lunch. I wondered how many times they’d talked about that. The crazy thing was, was that just then, one of them took a picture of it. I mean. Probably just testing his camera, though.

“Sank you,” said my waiter.

The reason I bring it up at all is when I was leaving. They had this dusty old and cracking “Opening Soon” sign stuck behind the back porch. That and a ‘Power hoop’ basketball hoop. The whole family probably lived above the place. But it made me think, that sign. Just makes you think, is all.